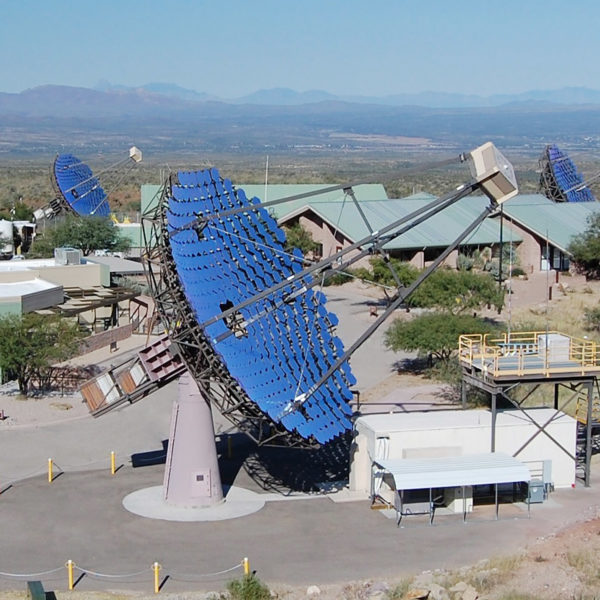 The recently (2007) completed VERITAS detector consists of four 12 m diameter telescopes which collect and measure the Cherenkov light radiated by the relativistic particles in air-showers caused when very-high-energy (100 GeV – 10 TeV) gamma rays interact in the upper atmosphere. This kind of astronomy is sometimes called `ground based gamma-ray astronomy’ and it is complementary to research done at lower energies by space-borne observatories such as AGILE and the recently launched (summer 2008) FERMI . VERITAS is one of three leading ground-based instruments world-wide. The others are H.E.S.S., located in southern Africa (Namibia) and MAGIC, located in the Canary Islands (La Palma).

Very high energy gamma rays are of great interest since they are generated in non-thermal processes and give insight into violent processes in astrophysics. Sources can be nearby supernova remnants, pulsar wind nebulae , and X-ray binary systems are examples in our own galaxy. They can also be much further away such as active galactic nuclei (AGNs). Measuring gamma-ray fluxes, especially simultaneously with other telescopes during a multi-wavelength campaign can lead to an understanding of how these exotic objects work at a basic level.

In addition to astrophysical studies, gamma rays can be used to address questions in fundamental physics. For example, what is the nature of dark matter? If it is made up of high-mass elementary particles, we could hope to see the annihilation gamma rays expected from high density regions like dwarf galaxies where such particles would cluster. Similarly, Lorentz invariance violation can be sought using gamma rays from rapid flares produced by distant AGNs.

Very-high-energy gamma-ray astronomy is closely related in culture and techniques to experimental particle physics. The detectors are built and run by large collaborations and the instrumentation (photomulitpliers, fast electronics, etc) is very similar to that found in accelerator-based experiments. Data analysis is done using custom software written by members of the collaboration. The McGill group contributed to the construction and commissioning of the VERITAS detector and continues to provide improvements to the hardware. At the same time, we have a leading role in development of analysis tools and their application for scientific studies. VERITAS is now collecting high quality data on a number of astrophysical sources and will continue in this mode for the next few years.