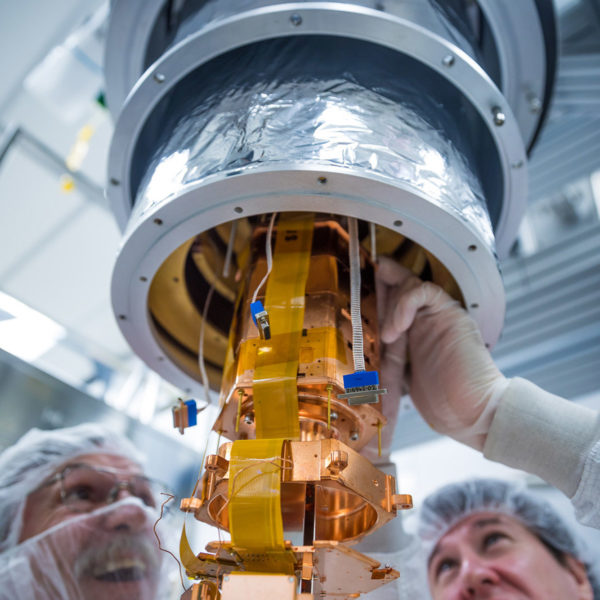 SuperCDMS uses cryogenic semiconductor detectors to search for interactions of Weakly Interacting Massive Particles (WIMPs) with ordinary matter. WIMPs are hypothetical particles proposed to solve the long-standing dark matter problem. Vast amounts of invisible matter are observed in the Universe through gravitational effects, but none of the known particles has the right properties to account for the observations.

The key challenge is the very low WIMP interaction rate, combined with the overwhelming particle flux from natural sources such as cosmic radiation or environmental radioactivity (“background”). SuperCDMS detectors measure phonons (lattice vibrations) as well as ionization caused by particle interactions. This information provides a very powerful discrimination between background events and potential interactions of WIMPs in the detectors.

SuperCDMS currently operates 15 Ge detectors with a total mass of ~9 kg in the Soudan Underground Laboratory roughly 700 m below the beautiful landscape of Northern Minnesota. Residual cosmic radiation reaching the well shielded experimental setup is expected to eventually limit the sensitivity of the experiment. Therefore we are preparing for a new experiment at SNOLAB, roughly 2 km below ground near Sudbury, ON, which will be designed to hold several hundred kg of detector mass for a substantial increase in sensitivity. SuperCDMS SNOLAB will be able to test the bulk of the proposed parameter range for dark matter WIMPs with a particular strength for detecting low mass WIMPs.