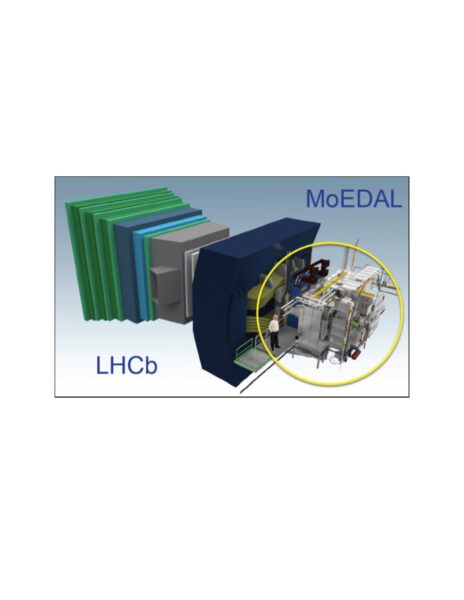 MoEDAL (the Monopole and Exotics Detector at the LHC) was approved as the LHC’s 7th experiment in 2010. It searches directly for the magnetic monopole – a hypothetical particle with either a “north” or a “south” magnetic charge instead of both. It also searches for other exotic particles that would indicate new physics beyond the Standard Model, such as dyons, Q-balls, black-hole remnants, multiply charged particles and massive singly charged particles.

The MoEDAL detector, deployed close to LHCb at Point 8 on the LHC ring, has a dual nature. First, it acts as a giant camera, composed of 125 plastic Nuclear Track Detector (NTD) stacks with a total of 47m2 of deployed plastic. Second, it has about one tonne of trapping detectors designed to register and capture exotic particles for further study. An array of state-of-the-art real-time TimePix pixel detectors help to monitor MoEDAL’s radiation environment.

If exotic theoretical particles exist, they could be formed in collisions at the LHC. Such particles would create a tiny trail as they traverse the MoEDAL detector, breaking long-chain molecules in the plastic NTD stacks. MoEDAL researchers use ultra-fast scanning microscopes to scan the NTD sheets to look for such trails, as well as analysing the trapping volumes for the presence of trapped particles.

In preparation for data taking during run 3 of the LHC, the MoEDAL detector has been upgraded to MoEDAL-MAPP. The addition detector, MAPP (MoEDAL Apparatus for Penetrating Particles), was approved in 2021 to extend MoEDAL’s physics reach by providing sensitivity to milli-charged particles and long-lived exotic particles.