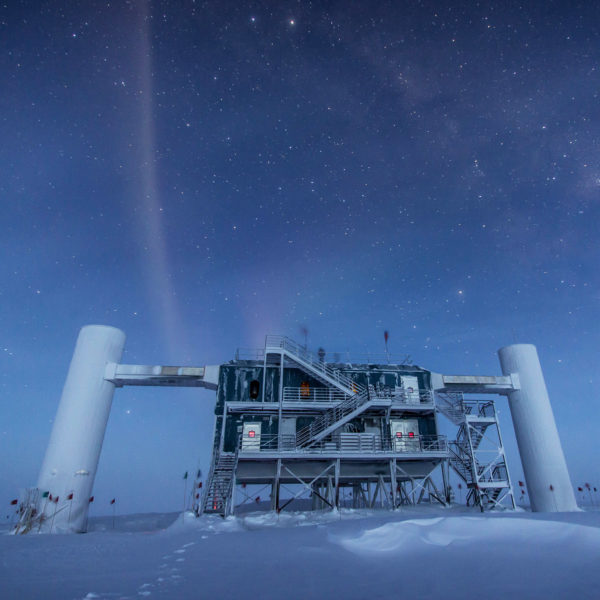 IceCube is the world’s largest neutrino detector, conceived to detect high energy neutrinos (neutrino energies > 1TeV) from cosmological sources, nearby dark matter annihilations or decays. The detector, completed in December 2010, consists of a three dimensional array of “strings” each supporting 60 Digital Optical Modules (DOMs) arranged in the deep Antarctic ice near South Pole Station. Each DOM contains one photomultiplier tube (PMT) used to detect the Cherenkov light. In addition, IceCube incorporates a surface array, IceTop, to reconstruct cosmic-ray induced air showers in the atmosphere above the buried array. The observatory significantly extended its physics potential with the addition of the DeepCore subarray. DeepCore, consisting of eight additional strings with a smaller string spacing and higher quantum efficiency PMTs, lowers the neutrino detection energy threshold of the observatory from a few 100 GeV to 10 GeV. This improvement in the IceCube “low-energy” neutrino sensitivity has initiated a particle physics program in the Antarctic.

Canadian activities in IceCube focus on the particle physics available at the low end of the IceCube detector’s energy range (< 1 TeV), which has been greatly enhanced by the addition of the DeepCore array. Atmospheric neutrinos present an attractive option for measurements of neutrino oscillation parameters given the broad range of energies and path lengths available through the Earth for which the oscillations are functionally dependent. A challenge to advancing atmospheric neutrino measurements has been to construct detectors that are large enough to accumulate the very high statistics required to extend precision measurements achieved by the Super Kamiokande experiment and neutrino collider projects like T2K and MINOS.

IceCube Canada currently consists five faculty members, four at the University of Alberta and one at the Unviersity of Toronto.