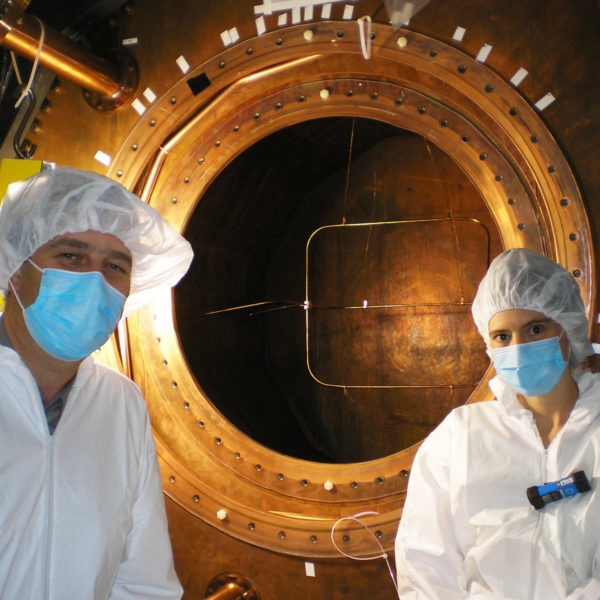 The search for the nature of the neutrino
The nature of the neutrino is an open question in particle physics. Neutrinos are the only massive fundamental fermion particles with zero electric charge. This opens the possibility that neutrinos could be of Majorana nature, meaning that particle and anti-particle can be described as two helicity eigen-states but otherwise identical particles. One approach to answering the question about the neutrino’s nature is the search for lepton number violating processes. Among those, the search for neutrino-less double beta decay (ββ0ν) is the most promising approach. The Enriched Xenon Observatory (EXO) collaboration is searching for ββ0ν in 136Xe.

Searching for ββ0ν with EXO-200
The EXO-200 detector is located at the Waste Isolation Project Plant (WIPP) mine in South-East New Mexico (1,585 metres-water-equivalent shielding). EXO-200 consists of two time-projection chambers (TPCs) with a shared cathode, and deploys about 175kg of liquid xenon, enriched to more than 80% in the isotope 136Xe. The liquid xenon is a source and a detection medium at the same time. The energy and position of each deposition of energy inside the TPC is recorded and reconstructed. EXO-200 has been taking data for several years providing the first observation of ββ2ν in 136Xe and a very precise measurement of its half-life T1/2 = 2.165 ± 0.016(stat) ± 0.059(sys) × 1021 years. The EXO-200 collaboration also performed a sensitive search for physics beyond the standard model resulting in a limit on ββ0ν of T1/2>1.1×1025 years at the 90% confidence level (C.L.). Following a mine fire in 2014, data taking had to be stopped. It resumed in early 2016 after an upgrade to the electronics and the installation of equipment to reduce the Rn concentration in the air surrounding the cryostat. EXO-200 is expected to take data for at least two more years. For more information, visit the EXO-200 website.

Searching for ββ0ν with nEXO
In parallel to the operation of EXO-200, the development of nEXO, a next-generation liquid xenon TPC has started. The nEXO detector will consist of 5T enriched xenon and will be deployed at a selected underground laboratory, ideally the SNOLab facility in Sudbury. The detector is being designed to be sensitive to a ββ0ν half-life exceeding 1028 years. At this level of sensitivity, the nEXO detector has the potential to completely probe the mass range under the inverted neutrino mass hierarchy hypothesis. The Canadian EXO collaborators are Carleton University, Laurentian University, McGill University, Université de Sherbrooke, and TRIUMF. The team is focusing on the development of advanced photon detection techniques and the measurement of radioactive contamination in various materials that are under consideration for the nEXO detector. In addition, the development of a Ba-tagging technique is pursued where the 136Xe ββ-decay daughter, 136Ba, is extracted from the detector volume and identified. If this extraction is efficient it would render the measurement basically background-free and would thus greatly enhance the sensitivity of the detector compared to a conventional, background limited detector.