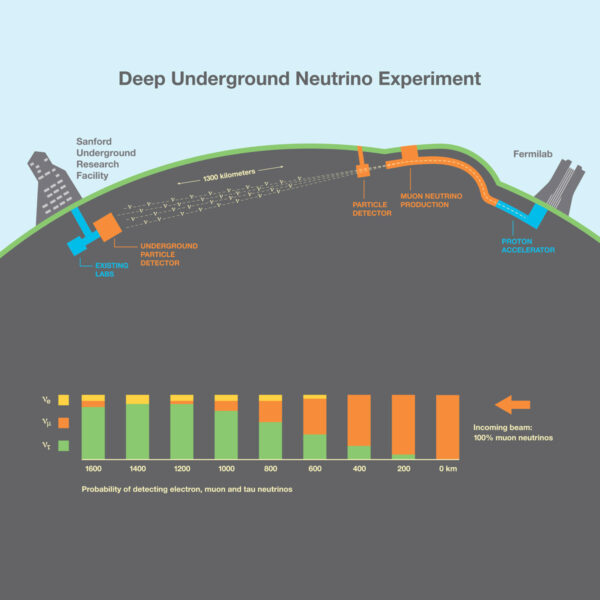 The goal of the Deep Underground Neutrino Experiment (DUNE) is to answer long-sought open questions in the field of particle physics. Observing a violation of the matter-antimatter symmetry by neutrinos would be a groundbreaking discovery and could explain the abundance of matter over antimatter that exists today. Determining whether or not the neutrino mass spectrum matches that of the charged fermions will be an important input to our understanding of the origin of neutrino masses and determining how they fit into the Standard Model of particle physics.

DUNE will achieve these two main goals by building an intense neutrino beam with a broad neutrino energy spectrum at Fermilab that is aimed towards the Sanford Underground Research Facility (SURF) in Lead, South Dakota. SURF will house four liquid argon time projection chambers with a total fiducial mass of 40 kton. These detectors will have unprecedented abilities to access the details of neutrino interactions while also providing a new window into naturally occurring neutrinos from the atmosphere, the sun and beyond. The DUNE experiment will measure neutrinos over a broad energy spectrum ranging from 0.5 to 4.5 GeV and uses a baseline of 1300 km

Beside neutrino oscillation measurements, DUNE also has an ambitious non-accelerator physics program which includes looking for proton decay and searching for new physics such as sterile neutrinos, non-standard interactions, and dark matter. Finally, DUNE will be sensitive to cosmological sources of neutrinos, such as quasars and supernovae. Although capturing the signal of a supernova poses new challenges in terms of data acquisition and computing infrastructure, it would provide precious information for both the neutrino and the cosmology communities.

More details are available at: DUNE