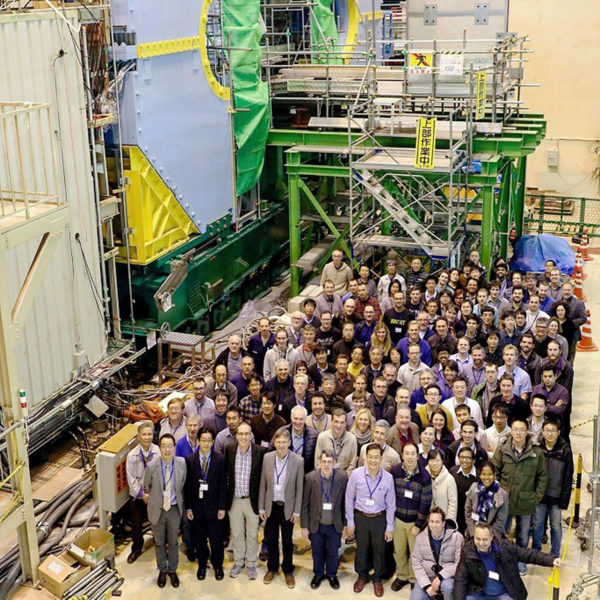 The Belle-II experiment will look for evidence of new physics at the precision frontier in electron-positron collisions at a centre-of-mass energy of 10.58 GeV. It will operate at SuperKEKB, which is an upgrade of the 3.0km circumference electron-positron collider at the KEK laboratory in Tsukuba, Japan. It is designed to achieve a world-record collider luminosity of 8x1035cm-2s-1. Construction is on schedule for a physics start in late 2016. The centre-of-mass energy is selected to be just above the threshold for producing particles containing the b-quark (B-mesons) and will also produce events containing pairs of tau leptons as well as events with particles containing the charm quark. This facility will produce 30 times the world’s total existing data sample of these processes. With this sample, Belle-II will the probe flavour sector of subatomic physics by searching for rare processes and making precision measurements.

Such a precision frontier facility opens an exciting window on new energy scales beyond the reach of existing colliders, including CERN’s Large Hadron Collider (LHC), and will help explain any new physics that might be discovered at LHC, by virtue of quantum loop corrections which are sensitive to very massive, and as yet undiscovered, particles. These hypothesized particles manifest themselves in precision measurements of rare processes. They also reveal themselves via the presence of processes that are forbidden within our current understanding of physics. Belle-II will make measurements of CP violation and the CKM quark mixing matrix elements with unprecedented precision in order to search for deviations from the Standard Model and will be the most sensitive experiment to search for lepton flavour violation in tau decays. A wide variety of other precision frontier measurements with B mesons, charm, tau, radiative return events, and two-photon physics will also be carried out.