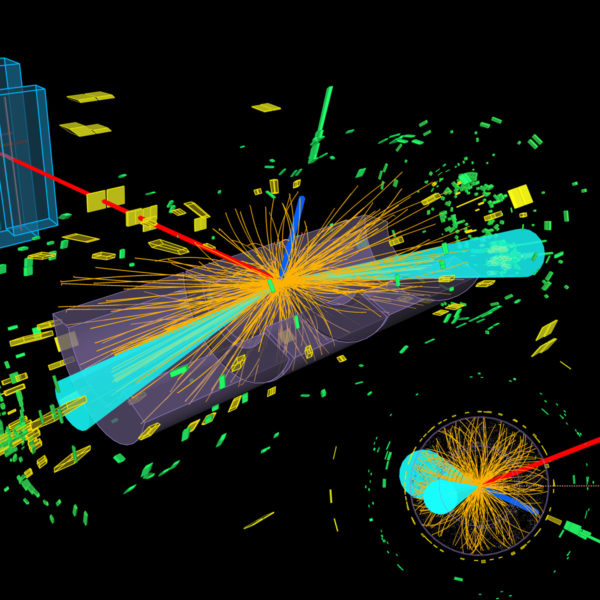 The ATLAS experiment is designed to study the results of proton-proton collisions produced by CERN’s Large Hadron Collider (LHC) at the highest energy ever achieved in a laboratory. The Canadians played and continue to play a vital role in all aspects of this international research program.

Since 2010, the ATLAS experiment has been studying high-energy proton-proton and heavy-ion collisions at the LHC.  In 2012, the ATLAS and CMS experiments discovered a new particle  compatible with the Standard Model Higgs boson, which won the Nobel Prize in Physics in 2013 for François Englert and Peter Higgs. The center of mass energy of proton-proton collisions at the LHC  is the highest energy available and will reach 13.6 TeV centre-of-mass energy during Run 3, which starts in 2022.  The LHC will deliver an integrated luminosity of approximately 300/fb during Run 3, tripling the size of the data set collected at 13 TeV centre-of-mass energy. As of January 2022, the schedule has long shutdown 3 (LS3) starting in 2026 and to last for 3 years to upgrade the LHC and ATLAS for the High Luminosity LHC (HL-LHC) era.

These record energies, combined with very high luminosity  (which determines the rate of collisions) allow ATLAS to continue to study in detail the phenomena associated with the energy scale of electroweak symmetry breaking, called Terascale. A wide range of physical phenomena is accessible at the LHC  and participation in this program is seen as an essential element of the future Canadian high energy physics programme.  An important milestone for the Canadian ATLAS Group was the funding by the Government of Canada of components for the LHC. These in-kind contributions were made by TRIUMF.  In 2018, funds were approved by the Government of Canada for further in-kind contributions for the High Luminosity Large Hadron Collider (HL-LHC) facilitated by TRIUMF. See this article from TRIUMF.

The Canadian ATLAS group has been an active contributor to the ATLAS experiment since the collaboration’s inception in 1992. The team is made up of IPP member physicists from the following universities:  Alberta, Carleton, McGill, Montreal, Regina, Simon Fraser, Toronto,  UBC, Victoria and York, as well as the TRIUMF laboratory.  More than 150 Canadian physicists are involved,  including 40 senior scientists.

Canadians contributed to the construction of the ATLAS liquid  argon calorimeters, in particular the “endcap” hadronic calorimeter  and the “forward” calorimeter, as well as the frontend electronics and the cryogenic feedthroughs. Current contributions include construction of a new track detector, construction of an additional component for the muon detector, improvements to the liquid argon calorimeter signal readout electronics, development of cloud  computing techniques, beam state monitoring, detector performance studies, and of course, numerous data analyses, including detailed studies  of the properties of the Higgs boson, measurements of Standard Model  parameters, and the search for new physics beyond the Standard Model.

Canadians have directly contributed to the analysis of ATLAS data resulting in hundreds of publication on a wide range of topics including the measurement of Higgs boson properties, studies of the electroweak sector, and searches for hints of new physics phenomena.